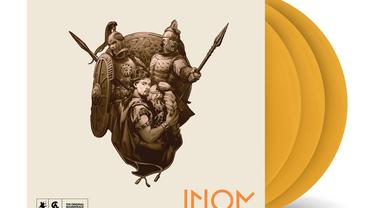 "Now Hera this! Laced Records has joined forces with Creative Assembly™ and SEGA® to release the original soundtrack to A Total War Saga: TROY on deluxe triple vinyl and double CD.

TROY marks the first game in the BAFTA award-winning Total War™ series to focus on the ancient Bronze Age, and is the furthest back in history that the series has travelled in its tales of epic conquest. Inspired by The Iliad – Homer’s sweeping tale of romance and bloodshed – TROY focuses on the historical flashpoint of the Trojan War, bringing the conflict to life as never before.

Additionally, all purchases through the Laced Records store will include a free digital download code for the soundtrack on Steam.

All music has been specially mastered for vinyl and CD by Joe Caithness. Sleeve artwork was created by illustrator Lulu Zhang, artist Tsvetelin Krastev and designer Matt Wright

TROY Audio Director and Composer Richard Beddow says: “TROY gave us a unique opportunity with its highly stylised depiction of the Trojan War and the ancient Aegean to create something musically bold, new and exciting ‒ a fresh, contemporary and forward-looking approach with the music direction. Once again, we are delighted to be joining forces with Laced Records to help us bring our music to the widest audience.”