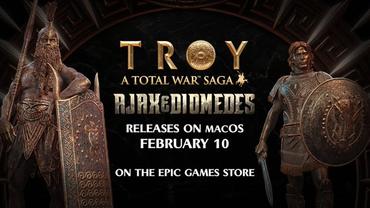 "Feral Interactive have announced that A Total War Saga: TROY - Ajax & Diomedes DLC will be released for macOS on February 10th.

Marking a new chapter in the evolution of A Total War Saga: TROY, this latest DLC sees King Agamemnon call his mightiest warriors to battle; imposing Ajax, towering above opponents, and shrewd Diomedes, young King of Argos and master tactician.

Seen as the sword and shield of their king, Ajax & Diomedes will bring 18 powerful units as well as Paragon units of veteran warriors to punish the Trojans. With the new factions come fresh mechanics, unique skill trees and a new siege map for the seven-gated city of Thebes. Further details about the DLC can be found on the Total War Blog.

Free content will also be available alongside the DLC, with Hephaestus, God of Blacksmiths and Volcanoes, added to the Divine Will system. Players who beseech and appease him gain access to his epic agent the Divine Craftsman, who can upgrade their soldier’s equipment.