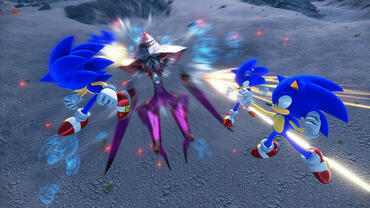 "To keep the excitement of Sonic Frontiers' launch going, rock band ONE OK ROCK has debuted a new music video for Vandalize, the ending theme for the Blue Blur's newest open-zone adventure. Vandalize is a collaborative effort between ONE OK ROCK and SEGA, which reflects both the vast gameplay environment and high-speed action players can expect from Sonic Frontiers.

"We've never collaborated with someone like this on a music video before, so it was a new experience for us, and we enjoyed ourselves!" said ONE OK ROCK's lead vocalist, Taka. "When everyone watches the final product, they can see how perfectly the music matches Sonic's movements. I hope everyone gets to see the video as soon as possible!"

You can check out the official music video here, which combines an incredible performance from the band with Sonic Frontiers game footage and cutscenes.