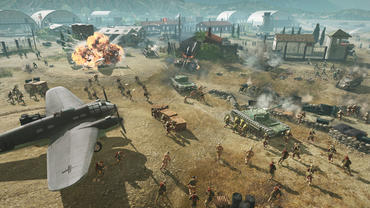 "Today, we're here to share with you a brand-new trailer for Company of Heroes 3, featuring the infamous German Wehrmacht and their military might. Available as one of four factions at launch, the Wehrmacht will weather the storm before unleashing an array of devastating counterattacks to defeat the enemy.

Where the Wehrmacht feel most different is in their tech structure. During the course of a battle, players will make a choice between investing further in their buildings, unlocking units such as the Wirbelwind or StuG, or progressing upwards to the likes of the Panzer IV. Additionally, Transfer Orders will also allow you to exchange your Grenadiers for Panzergrenadiers or Jaeger Infantry as the game progresses.

Iconic weapons such as the Tiger I and Flak 36 return, while exciting new entrants such as the 20cm Flak, and Fallschirmpioneers offer new ways to play. Designed with input from our community, the Wehrmacht is our biggest imagining of this army to date, and offers incredible strategic depth.

Want to learn more? The Relic community team will be hosting a deep dive livestream on November 24 at 10 am PST on Twitch. Company of Heroes 3 gameplay designers Jason Zhang and Marco Fiore will join to discuss how they assembled the Wehrmacht into a formidable force, including a look at the faction’s unit roster and battlegroups, how multiplayer is impacted by the Germans, and more.

Company of Heroes 3 is now available for Pre-Order! Get the Launch Edition and receive the Devil’s Brigade DLC pack featuring Legendary skins for Infantry, Vehicles, and other Legendary tier cosmetics."